"2018 European Year for Cultural Heritage: an invitation to share cultures in Europe"

Cultural heritage matters for Europe. The Council of Europe has played a pioneering role in raising awareness of the importance of the heritage issue. According to the Treaties, The European Union "must ensure the safeguarding and development of the European cultural heritage". It is in this perspective that 2018 was proclaimed as the European Year of Cultural Heritage.

On 5 February in Nantes, ENCATC member, Claire Giraud-Labalte, art historian, emeritus lecturer, ENCATC ambassador on heritage was joined by Jean-Christophe Barbato, professor of public law at the University of Nantes and holder of the Jean Monnet Chair "Law and politics of the culture of the European Union" for a public conference on both the history of heritage and that of Europe.

More than 120 audience members were given an introduction to what makes for "common heritage", an overview of legal protection by national laws (mainly in the late 19th and early 20th centuries),  consequences of global conflicts, the place of culture in the construction of the EU, the status and role of cultural heritage in Europe, and the strong challenges faced.

The event also an opportunity to present what Europe has been doing for decades and to announce some initiatives launched in 2018. The European Year of Cultural Heritage is not just a matter for specialists, but it concerns all of citizens and invites everyone to "share our heritage" what constitutes a common source of memory, dialogue and creativity.

The audience appreciated the two perspectives, one of an art historian and the other of a jurist and specialist in the law of culture at the European level. Committed to the cross disciplinary approach and to the sharing of knowledge, these two researchers share the desire to make Europe better known and appreciated, including its cultural wealth, its fragility and potential, and thus help to ensure the preservation of its future.

After this successful public conference, the aim is now to organise similar events throughout Europe, in either English or French, and held in the framework of the European Year of Cultural Heritage. 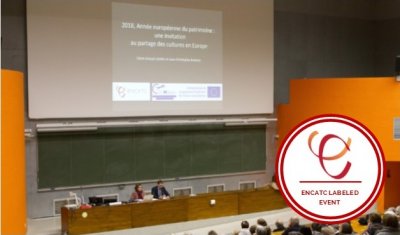