Piet Jaspaert has a PHD in Political and Social Sciences(Ghent 1972) and got an Eisenhower Exchange Fellowship in 1990 . He has been teaching languages,  opening and running the Cultural Center in Hasselt, managing the Communication and Marketing of KBC Bank and Insurance. For ten years he has been President of the Jury for ethical practices in Advertising.

He held many volunteer positions. He was leader of the National Organisation of Catholic Students. The Flemish Government has called upon him to take on national tasks, such as the Presidency of the Youth Council, the Advisory board for Theater and the Government’s Agency Tourism Vlaanderen. Thirty years ago, he was one of the three founders of Open Monuments Day in Flanders. He is still involved in social and cultural organisations as Klarafestival, Concertgebouw Brugge, Kom op tegen Kanker, 30 CC Leuven….

He has been Board Member of Europa Nostra for 9 years and is since 2015 Vice-President. He is particularly involved in EU affairs, European Union Price for Cultural Heritage/Europa Nostra Awards and the 7ME ( the seven most endangered sites) program and the coordination of the European Heritage Alliance 3.3, an informal platform of currently 48 European and international networks active in the wider field of cultural heritage. 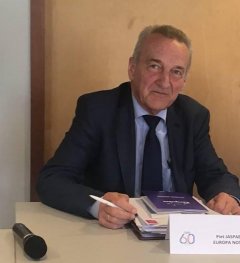