Chair of the Board, The Valley of the Possible, Chile

Beatriz is a curator and cultural policy advisor working at the intersections of cooperation, governance and production of knowledge. She holds a MA in Arts Management and Cultural Policy from the Goldsmiths College, University of London where she focused her research on Residency programs and Cultural Diplomacy. Currently she is completing a Master in Sciences in International Affairs in Aalborg University, Denmark, focusing on the Arctic region and its indigenous governance processes.

She was the first Director of Centro Nacional de Arte Contemporáneo Cerrillos (the National Centre of Contemporary Art - the first government-run facility dedicated to contemporary artists in Chile) from 2017–2019, where she developed a focus on interdisciplinarity, promoting encounters between art and community through exhibitions, research projects and public programs with artists like Theo Jansen, Alicia Villarreal, Bernardo Oyarzún and Cildo Meireles amongst others.

She has worked in several institutions in Chile and abroad, specializing in management of contemporary art projects. She was Head of production of MAVI-Museo de Artes Visuales in Chile 2007-2014, where she organized exhibitions of Chilean and Latin-Americans artists, and major monographic exhibitions of international artists like Wolfgang Tillmans, Joseph Beuys and Gerhard Richter. Beatriz was producer of Chilean art prize "MAVI Premio Arte Joven", between 2007 and 2013, and its curator and producer between 2011 and 2013.

From 2017-2019 Beatriz was in the curatorial committee and member of the board of the National Centre for Contemporary Art, of the Ministry of Culture, Arts and Heritage in Chile and from 2012-2014 of the Museum of Visual Arts (MAVI), Chile. Since 2018 she is member of CIMAM (International Committee for Museums and Collections of Modern Art). 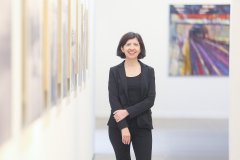