Project Officer at the UNESCO Liaison Office in Brussels and Representation to the EU, Oriol Freixa Matalonga (Spain, Barcelona) is expert in international cultural cooperation with more than 20 years of experience in the management of development cooperation programmes in international organizations of the European Union (EU) and United Nations (UNESCO).

Between 2008 and 2014 he was programme specialist in UNESCO-Paris, in the Division for Cooperation with Financial Sources of the Bureau of Strategic Planning. He was a seconded and national expert from the Development Cooperation Spanish Agency (Spain), responsible for several Funds in Trust of cooperation with EU Member States (Spain, Portugal, San Marino, Andorra, Cyprus) in the areas of Culture, Education, Science and Communication. He participated in the coordination of the thematic window ‘Culture and Development’ from the Millennium Development Goals Fund (MDG-F). In the Culture Sector of UNESCO, he participated in the coordination of projects related to the UNESCO Conventions (essentially the World Heritage Convention (1972), Intangible Heritage Convention (2003), Underwater Heritage Convention (2001) and the Convention for the Protection and Promotion of the Diversity of Cultural Expressions (2005) among others).

Oriol has prepared, managed and coordinated policies and programmes for the cultural sector within the European Development Fund, particularly for the Africa, Caribbean and Pacific (ACP) Group of States, as well as for the Culture and Development binomial. In 2006 he was one of the principal coordinators of the 2nd ACP Culture Ministerial meeting and the 1st ACP Festival in Santo Domingo (Dominican Republic).

He was Coordinator of projects for the Interarts Foundation in Barcelona organizing the Euro American and Euro African Cooperation Campus.

He speaks and writes Spanish, French, English, Catalan, Italian and Portuguese. He is married and has two children. 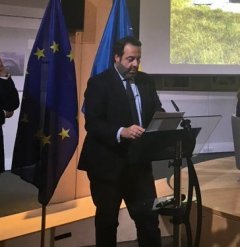