Effy Tselikas : her entire life is dedicated to deal with others cultures

She has been travelling around the world all her life. First with her parents, Greek political refugees in North Africa and Latin America where she received a French education; then, all over Europe and Asia through her jobs, her loves, her children and friends. Constantly searching similarities behind differences.

She has a  History and Economics degree and has acquired several languages in order to communicate with every one. After various posts in France and abroad, she is actually a journalist for the Greek and French media (TV, radio, press magazine), and film maker for documentaries, specialised in subjects such as double culture, historical heritage and migration. She also teaches  “Intercultural communication” in universities in France and North-Africa. She contributes as an expert to projects of the Council of Europe, for instance “Cultural values for Europe” and “Learning history; the image of other”.

Her life is divided between a small island in Greece, Paris and  travels. She is involved in Greek-Turkish co-produced media programs and is prepare a new book about multiple identity. She is also in the process of completing a PhD in Communication Studies at the University of Sorbonne, intituled ”Television and geopolitics”. 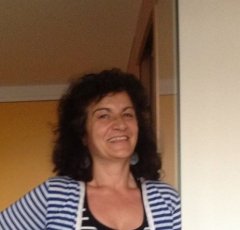