Initiator and Director of CINETic, Romania

He is an independent stage director and cultural manager. He put in stage more than 15 independent and state theater plays which were awarded national and international prizes. Starting from his interest in new dramaturgy and expanding the areas of performance expression. Alexandru Berceanu collaborates within interdisciplinary projects in the visual area like for example the Submersive and subversive installation 1958-1968 or within the graphic novel Mickey on the Danube, “Jumătatea Plină” Publishing House. Alexandru Berceanu is a founding member of dramAcum, NGO operating in the field of developing new dramaturgy.

At present he is a Ph.D. candidate at the Theater Faculty within “Babes-Bolyai” University, with the thesis having as topic “Violence in Performing Arts, from Hypnotic Power to social responsibility, coordinator University Professor, Ph.D. Miruna Runcan. His last show Interface 3 materialized his interest in the neuro-cognitive field, as within the show music was generated in real time starting from the brain waves which were EEG monitored and the color of the lights was controlled in the same manner. The generated music showed the emotional reaction of the EEG monitored spectator.
Alexandru Berceanu was involved in social art projects, like the art workshops “School in the street”, “Rahova – Delivery” and he has a rich teaching experience, being a teacher for more than 10 years within “I.L. Caragiale” UNATC, staging department.

Alexandru Berceanu is the initiator and director of the CINETic project of “I.L. Caragiale” UNATC 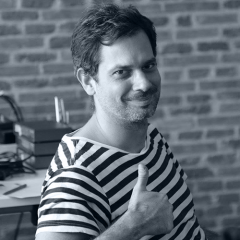