General Manager of the National Institute for Cultural Research and Training, Romania

Carmen CROITORU, PhD - associate professor at the „I.L. Caragiale” National University of Theatre and Film since 2011 and has 20 years of experience in teaching cultural management. She is constantly preoccupied with developing cultural management in Romania and being involved in the legal reglementation of this field (law for implementing management for cultural public organisations, and the legal status for the Cultural Manager as a profession).

She worked as a project developer for several important cultural projects: adminstrator and manager of the 1st BBC Independent Journalism School set up in Bucharest by the BBC Training Dept. in 1992; the 1st British Contemporary Theatre Festival in Bucharest, the Contemporary Dance Festival, translations of contemporary plays that have been staged in several theatres in Romania, etc.

Carmen CROITORU initiated several research studies concerning audience development, cultural consumption, and national strategies for Culture or research analysis on the Cultural Creative Sectors. Since 2014 she has been the General Manager of the National Institute for Cultural Research and Training and has established the basis for the National Conference of Cultural Managers that has been in the running every year since.

She is a member of several international and national professional networks such as: ENCATC,, Europeana, ECURES, National Representative member for the EU Comission for Creative Sectors, Board member of the Compendium for Cultural Policies and Trends in Europe, Founder of the Professional Association for Romanian Cultural Managers,  Co-founder of the ECUMEST Association - an interface organisation, whose mission is to intermediate and accompany the democratisation (accession) and cultural democracy processes (diversity and participation), for the institutional emancipation of the cultural sector in Romania and in Central and Eastern Europe. 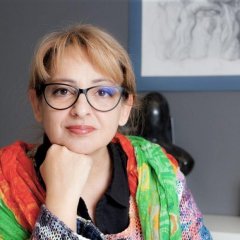