Special Government Advisor and Deputy Head of Cultural Exports and Exchange Unit at the Ministry of Education and Culture, Finland

Kimmo Aulake is currently Special Government Advisor and Deputy Head of Cultural Exports and Exchange Unit at the Ministry of Education and Culture of Finland. He has worked professionally in the field of cultural policy for 20 years. In addition to cultural policy development proper, he has worked - both nationally and internationally - on a number transversal themes including information society, trade policy, cultural diversity, development policy, evidence based development, and creative economy. From 1994 until 1996 he was seconded by the Ministry to the European Commission, DG X, Media Unit, where he represented the Unit in negotiations to open up the Media Programme to the then-candidate countries. From 1998 until 2001 he worked as policy advisor in the Council of Europe, where he was responsible for the Council's New Information Technologies -project. During that time, he was the Secretariat official responsible for drafting Council of Europe Declarations on New Information Technologies and on Cultural Diversity. The latter was the first legal text adopted by an intergovernmental organisation on cultural diversity. Finland joined the informal network of Ministers of Culture, INCP, in 2002 and he has represented the Ministry in the officials' working group ever since, including having been the draftsman for the INCP draft convention on cultural diversity in 2002-2003. He was also member of Finland's negotiating team on the UNESCO Convention on the Protection and Promotion of the Diversity of Cultural Expressions. He is or has been a member or chair of numerous intergovernmental committees and working groups, including the chair of the Council of Europe's Steering Committee for Culture on 2006-2008, Chair of the Council of Europe's CultureWatchEurope Task Force (2008-onwards) and member of the EU Council of Ministers Committee on Culture (CAC) from 2007 onwards. During the last couple of years, he has worked extensively to harness the evidence base for cultural policy and to develop cultural exports and creative economy. He has been speaking or moderating in several international conferences on these topics. In Finland, he has, inter alia, chaired an Inter-Ministerial working group to establish a Satellite Account for Culture and is the secretary general of the Ministerial Steering Group for Cultural Exports. 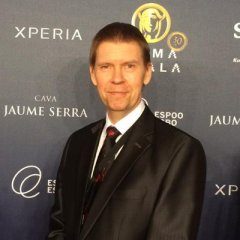