Alba Victoria ZAMARBIDE URDANIZ graduated in Architecture from Navarra University (Spain) in 2011, with a specialization in History of Architecture and Heritage Preservation. In 2012, she joined Shigeru Satoh’s laboratory in Waseda University, Tokyo, Japan. In March 2018 she received her PhD titled “Re-defining the role of “buffers” in the management of the historical territory The discrepancies between theoretical concepts and practical interpretations of  “buffer” zones in Eastern and Western Cultural World Heritage sites" from the same institution.

Her work gives an overview of different European and Asian historical regions bringing up the debate on alternative meanings for “buffer” zones as a possible catalyst of holistic regional management.

In parallel to her personal research, Alba has collaborated in diverse community participatory “machizukuri” (town-making) projects including disaster prevention and mitigation participatory urban planning in high density wooden areas in Tokyo, and rural development strategies based on local resources and traditions in Iwate prefecture, Japan.

From 2013, she has been fully involved in the long-term project that Waseda University is developing in Thua Thien Hue, Vietnam, in collaboration with the HMCC (Hue Monuments Conservation Centre). The project’s goal is to create a new preservation strategy for the Huong (perfume) river basin by connecting regional development with the idea of historical eco-cosmology and linked bottom-up initiatives. More recently, the team focused on the creation of a reference management, in which she tried to combine her own research insights with HUL ideas. 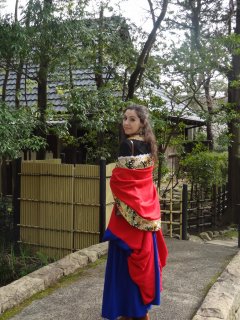