On the occasion of the 28th ENCATC Cultural Happy Hour on 26 May in Brussels, a small selective group of guests were invited to discover the world and intimate creative place of Marcel Hastir, painter, theosoph and member of the wartime Resistance. This inconspicuous building situated in the heart of the European quarter is not widely known to the public as an open space for visitors to see the artist’s works, atelier, and living space as well as for enjoying an exciting cultural programme.

Like many smaller cultural heritage sites in Europe, the Atelier Marcel Hastir does not have funding, popularity, or visibility or large and well-known European heritage. This is not a reflection of its limited value, rather it demonstrates in this case an undervalued and underused resource that has the potential to contribute to new business models, foster social cohesion and understanding, and preserve the life story and work of one of Belgium’s illustrious artists, Marcel Hastir (1906–2011).

Guests were led on a guided tour by Jacqueline Pacaud from the European Commission and dedicated stakeholder who in her personal time works to ensure the atelier’s continued preservation and curation.

In 1935 the artist had set up his studio and five years later he managed to secure permission from the German occupying authorities to use his studio for drawing and painting lessons. But this "art school" was above all a cover which enabled young people to meet in relative safety.

These people included Alexandre and Youra Livchitz, and Jean Franklemon, who apart from other acts of defiance came up with a particularly bold plan – to stop a train which was deporting Jews to Auschwitz. After the war, he continued to work in the atelier where he also organised events of a musical, literary, theatrical and intellectual nature. Following Marcel Hastir's passion and support for art and music, today the atelier celebrates his life and work and continues to serve as a concert space as it did during his lifetime.

As more funding becomes available in the future, the atelier would like to have the collection archived. It is already engaged the help of a curator who would like to see this project through, but it is an ambitious work as much of his papers and drawings are waiting in storage to be catalogued.

Following the guided visit, guests were invited to a presentation of OneHouseStand, a new company founded by two young entrepreneurs, Emanule Butticé and Maurizio Chicco. The two have designed an online platform for individuals and businesses to create their events from A to Z online, all in just a few clicks. Its listing of venues offers exclusively private homes and cultural spaces, including the Atelier Marcel Hastir. As a venue option on OneHouseStand, clients can hire space in the atelier Marcel Hastir to host their event in a unique and important historical place that today also serves as a cultural and creative environment. For the atelier, working with OneHouseStand it is a way to bring value, income and creative use, all while increasing visibility on the web and attracting new audiences and interest. As the atelier is looking at new business models, its relationship with the online platform is a first step to securing stable income to preserve the place, memory, and collection of a great Belgian artist.

“This marriage of a new business model and the value of cultural heritage we see here this evening is an inspiring example we would like to share with our stakeholders who join us in working for the sustainability of Europe’s cultural sector. It is also an interesting case to provide ENCATC members who are responsible for the education and training of cultural managers across the globe. It serves as a testament to how entrepreneurial thinking and action can use cultural heritage as a resource while increasing heritage’s value,” said ENCATC Secretary General, GiannaLia Cogliandro Beyens. 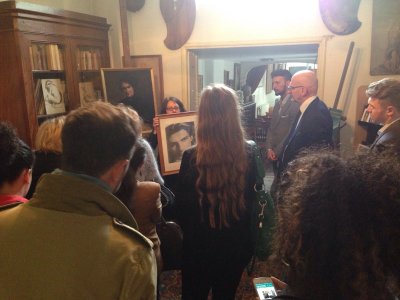