On the evening of 29 November in Brussels, 24 ENCATC Cultural Happy Hour guests had an exclusive tour of the Bruno Lussato Institute which houses an impressive collection of Japanese Mingei folk art since 2013, with some pieces ranging from the 12th to the 19th century. Bruno Lussato, a great French humanist, pianist and man of culture, joined forces with his sister Marina Fedier to create the Institute with the aim of spreading their holistic ideas on culture, philosophy and science and building bridges between cultures and disciplines.

Following a warm welcome by ENCATC Secretary General, GiannaLia Cogliandro Beyens, the evening’s programme kicked off with a talk on “Searching for Asia in the Capital of Europe: Introducing ULB-EASt” by researchers Pierre Bonneels and Takeshi Morisato from the Faculté de Philosophie et Sciences sociales, Université Libre de Bruxelles. They provided interested examples of bringing Japanese culture closer to audiences in Belgium through research projects, relations with the Belgium-Japan Association & Chamber of Commerce and collecting books for setting up a Japanese library.

The talk was followed by a presentation from the Institute’s Managing Director, Barbara de Muyser Lantwyck, on “The Lussato Institute: Understand-Inspire-Exchange -A holistic vision of the world with a focus on Japan to help understanding the new paradigms of the 3rd Millennium”. She then gave ENCATC Cultural Happy Hour guests a guided visit which concluded with a networking drink.

This event was an opportunity to discover more about Japan’s rich cultural heritage and connections between Belgian and Japanese organisations cooperating during the European Year of Cultural Heritage. 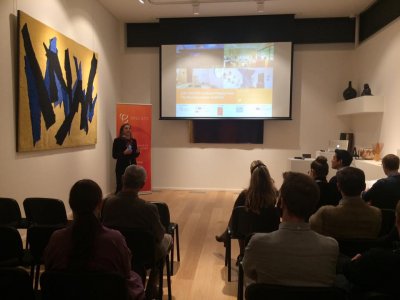