Aleksandar Brkić received the prize, worth 10,000 Euros for the best proposal in applied, cross-cultural research in Europe, during a festive ceremony at the 19th ENCATC Annual Conference in Helsinki.

After the process of territorial and cultural deconstruction in the Balkans (which is still not completed), all the young (or refurbished) states which came out from former Yugoslavia took the task of working on the establishment and consolidation of their new/old national identities. These identities were almost in every case based on the strengthening and support of existing (e.g. Serbia and Croatia) or creation of new nationalist paradigms (e.g. Macedonia and Bosnia and Herzegovina). At the same time, at EU level, cultural diversity and intercultural dialogue were being promoted as core values of the society, but the problem of the relation between national identity and the policy of a supranational union remained unsolved in the EU as well. Although the approaches to the construction of these identities were opposite (supranational vs. ational/nationalistic), the results are very close in the majority of individual EU countries and in the countries of former Yugoslavia, nationalism is a growing political and cultural trend. Culture played a large role in these processes of strengthening identities, both in the EU and in all of the countries that came out of former Yugoslavia.

This research will use comparative analysis and the "integrated" policy research approach to explore cultural policy tools that were used for the purpose of (re)constructing new national identities in three former Yugoslav states (Serbia, Croatia, Macedonia), and compare them with the cultural policy tools of EU in support of supranational identity of the union, focusing on France, Netherlands and Germany, with the aim of revealing cultural frameworks that support the construction of both type of identities national and supranational, and exploring similarities and differences between them.

Watch video interviews and video footage of the 2011 CPRA and Mark Schuster Prize Ceremony on the YouTube ENCATC Channel. 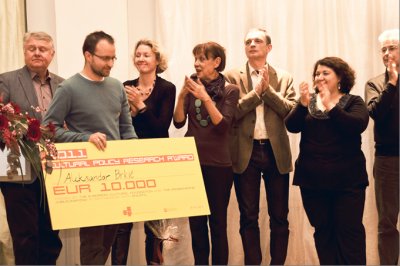