Dr. Cristina Ortega Nuere works as Chief Academic and Operating Officer of World Leisure Organisation, a non-governmental organization born in 1957 with consultive status of United Nations, since she was appointed in January 2016. Doctor in Leisure and Human Development, with a Master degree in Leisure Management, specialized in Cultural Management, she graduated from the Faculty of Arts and Philosophy from the University of Deusto and completed her studies in London, Middlesex and at Westminster University. She has done several research stages, the last ones at the University of Fordham (New York, EEUU) and Cambridge (UK). Previously to her present work, she has worked for over two decades at the University of Deusto as professor and researcher; the last five years as Director of the Institute of Leisure Studies and Principal Researcher of the official research group on leisure and human development. She has been the ENCATC President for 4 years, the leading European network of cultural policies and management education and research; and the Chair of ENCATC’s Policy Group Monitors of Culture, made up of over 40 cultural observatories worldwide. She has also been Jury member of the European Capitals of Culture. She has also been appointed twice as Member of the Basque Council of Culture of the Basque Government. Her area of specialization is cultural policies, cultural and creative industries, evaluation, wellbeing and human development.  She has participated in more than 50 research projects and wrote dozens of books and articles in the leisure and cultural field. She wrote a book of reference on Cultural Observatories where she built a utility model adopted in several cities and countries, Ortega, C. (2010) Cultural Observatories: Mapping of Observatorios Culturales. Creación de Mapas de Infraestructuras y Eventos, Barcelona. Ariel. She usually participates as a speaker in international scientific conferences worldwide, among her last conferences: Monitoring cultural policies and measures for sustainable urban economies and societies, UNESCO Creative Cities Beijing Summit II, Beijing, June, 2016; Research, evaluation and cultural policies, UCLG Culture Summit Culture and Sustainable Cities, Culture 21, Agenda 21 for Culture, Bilbao, March, 2015; FOCUS UNESCO World Forum on Culture and Cultural Industries, Florence, October, 2014. 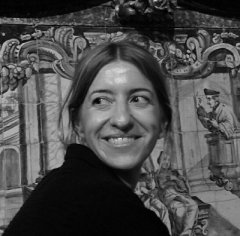