On 12 June in Brussels, the House of European History (HEH) opened its doors for a special after-hours visit for guests of ENCATC’s 45th Cultural Happy Hour.

ENCATC was welcomed by Taja Vovk van Gaal, Creative Director of the House of European History and who is a historian and curator in contemporary history and in cultural and project management. As the leader of the academic team responsible for curating exhibitions in the House of European History, she explained the process and challenges in selecting and displaying an impressive collection objects highlighting Europe’s shared cultural heritage for the museum’s opening in May 2017.

By far one of the greatest challenges was to foster reflection and dialogue around “what is European history?” and taking into account the many different experiences and view points held around Europe in different countries, regions, and cultures. It was also interesting to discuss “when does history begin?” According to HEH, it was yesterday and it has wasted no time in collecting objects and stories from recent events - it already has a Brexit display!

Guests also learned about the incredible achievement to translate all the material into the 24 official languages of the European Union. For Ms. Vovk van Gaal this was one of the most ambitious aspects of the HEH and most time consuming.

The museum is also very engaged with education and works with teachers and their students both in the museum and online. It hopes that other museums around Europe will participate in touring exhibitions in order to impact an even greater number of citizens who are not able to directly benefit from a visit to Brussels.

Overall, the museum strives to construct European identity by using the concept of memory because at the end of the visit, it hopes visitors will come away with more reflections, increased tolerance, and a greater sense of shared European identity. 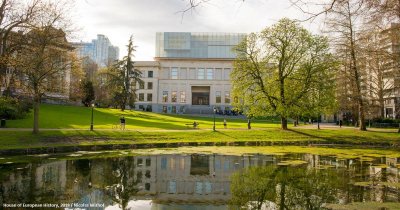