To what extent are gender inequalities persisting in arts and culture ? Starting from a case study of the place of women in the theatres of São Paulo, Brazil’s largest city, this Members Talk will give the voice to a researcher, João Oswaldo Leiva Filho, Director at JLeiva Cultura & Esporte, Brazil and MPhil/PhD Creative & Cultural Entrepreneurship, Goldsmiths, University of London, UK. He will share the details of his 2018 comprehensive mapping of the city’s theatre production, published in the Valencia-based Debats journal and in the ENCATC Magazine's August 2022 edition. The results of his research are telling. They clearly show that traditional labor values persist in Brazilian theatre, with data worryingly illustrative of the gender gap:

The findings of that study, but also  similar observations made by other researchers on our side of the Atlantic, show that clear scope for improvement exists, which will be at the core of this Members Talk in conjunction with our speakers’ field experiences and knowledge. Come take part in the Talk! 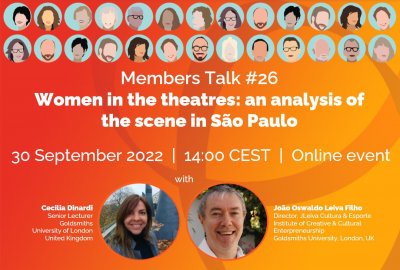