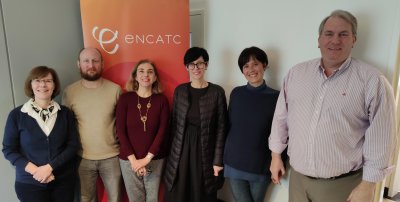 ENCATC board defines its functions for next two years

The Board of Directors met on 24-25 January in Brussels for its first meeting since the election results announced on 12 December 2019. On this occasion, it has elected for 2019-2021 the ENCATC President, Vice-Presidents, Treasurer, and Secretary.

Francesca Imperiale, Assistant Professor at the University of Salento, Department of Management and Economics in Italy, a full member of ENCATC, has been re-elected as ENCATC President during the inaugural meeting of the newly elected ENCATC board of directors for the next two years.

On this occasion of its first meeting, the board has also elected as Vice-Presidents Ana Gaio from City, University of London (United Kingdom) and Tanja Johansson from the Sibelius Academy, University of the Arts Helsinki (Finland). The board continues to have its trust in Dea Vidović from the Kultura Nova Foundation (Croatia) to serve again as Treasurer as well as in Richard Maloney from New York University (United States) in his previous role of Secretary. Gabrielle Kuiper from HKU University of the Arts Utrecht (The Netherlands) and Michal Lázňovský from the Academy of Performing Arts in Prague (Czech Republic) are also serving on the board.

The new ENCATC board is therefore composed of six Higher Education Institutions in the Czech Republic, Finland, Italy, the Netherlands, the United Kingdom, and the United States, and one cultural foundation in Croatia. Entrusted by the ENCATC membership since last December 2019, they will be furthering until October 2021 the network’s efforts to advocate for excellence in cultural management and cultural policy education, professionalise the cultural sector to make it sustainable, and provide the academic, research and professional communities a unique platform for discussion and exchange at the European and international level.