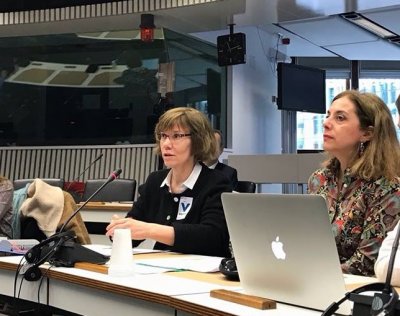 On 18 January in Brussels, ENCATC was invited to share its expertise at a stakeholder consultation convened in order to assist the European Committee of the Regions in drafting a response to the European Communication “Strengthening European Identity through Education and Culture”.

At the meeting, ENCATC, represented by its Vice President Ana Gaio and Secretary General Giannalia Cogliandro Beyens, expressed its strong belief that there is a need to boost and facilitate cross border cooperation, invest more in people and education, and strengthen the sense of European identity and awareness of cultural heritage. ENCATC is to follow up its intervention with a policy statement to further contribute to the European Committee of the Regions' opinion that will provide the perspectives of local and regional authorities on this topic.

The Committee’s Rapporteur, Tanya Hristova from Bulgaria (European People’s Party) will present the draft opinion in February and the European Committee of the Regions will adopt its opinion on this topic at its plenary session on 16-17 May in Brussels.

In November 2017, the European Commission released its Communication on “Strengthening European Identity through Education and Culture”. The ideas formulated in this document were intended as a contribution to the EU Leaders' Social Summit for Fair Jobs and Growth in Gothenburg on 17 November 2017, where discussions were held on the future of education and culture.

The main focus of the Communication “Strengthening European Identity through Education and Culture” of the European Commission is the creation of a European Education Area by 2025. The Commission believes that it is in the shared interest of all Member States to harness the full potential of education and culture as drivers for job creation, economic growth ,and social fairness as well as a means to experience European identity in all its diversity.