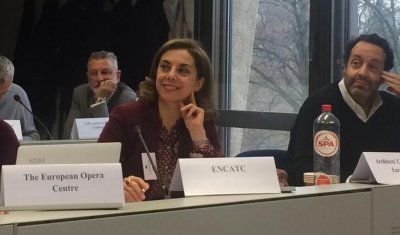 On 19 February in Brussels, ENCATC was among the key stakeholders including UNESCO and the Council of Europe attending the stakeholders’ consultation meeting on the European Agenda for Culture.

This event, hosted by the European Commission, was the opportunity to bring together 70 important organisations from across the cultural sector to share their views on what a new and ambitious Cultural Agenda should look like and how it could be implemented. The consultation meeting also reflected on the implementation and achievements of the current Agenda for Culture and considered what might be improved in light of societal and technological changes.

In the morning session, participants exchanged views and provided input on the policy framework, the European added value and the working methods to the European Commission. The afternoon session provided an opportunity for stakeholders to share their views on key actors, strengthening policy-programme links and sector-specific work/themes. This was followed by a tour de table during which all participants highlighted their single top priority in the presence of European Commissioner for Education, Culture, Youth and Sport, Tibor Navracsics, who responded to suggestions and reflected on the political context.

During the meeting, ENCATC’s Secretary General, GiannaLia Cogliandro Beyens stressed the importance to also involve research institutions among the currently invited stakeholders. She  also expressed ENCATC is in favour of a cross-sectoral approach of the programme in the future instead of a sectoral one.

This new European Agenda for Culture is one of the deliverables of the Communication on "Strengthening European Identity through Education and Culture", the European Commission's input to the Leaders' Summit in Gothenburg in November 2017. Building on this political momentum from the discussion on education and culture in Gothenburg and the December 2017 European Council meeting, the Commission will develop a new, ambitious and innovative Cultural Agenda with an emphasis on promoting a European identity through culture and values.