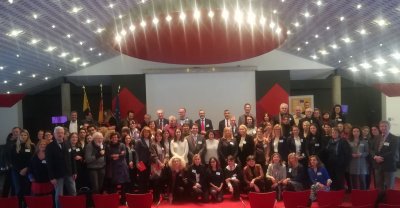 On 7 March, ENCATC attended the 4th meeting of the Stakeholders' Committee of the European Year of Cultural Heritage 2018, held in the framework of the Voices of Culture structured dialogue, entitled “Voices of Culture and Heritage”. Gathered in Brussels were stakeholders from the cultural sector as well as civil society organisations closely involved in the year’s activities, as well as the Council of Europe, ICCROM and UNESCO.

After the welcome by Dr Gunnar Schellenberger, State Secretary for Culture, Saxony Anhalt and the introduction by Michel Magnier, Director for Culture and Creativity, DG Education and Culture, the attendees had an update from the Commission on the state of implementation of the Year at EU level.

Next, there was a presentation on the implementation of EYCH2018 with an overview of key activities and events at national and European level, and what has been achieved so far.

An open discussion followed on what could be improved on the side of the European Commission, the national coordinators, and the members of the stakeholders' committee. ENCATC, represented by its Secretary General, Giannalia Cogliandro Beyens, shared its challenge as a cross sectorial network to focus on one specific sector within cultural management and cultural policy.

In the afternoon, a joint session was organised with the EYCH National Coordinators who have been appointed by each Member State to implement the year and coordinate events and projects at local, regional and national level. This was an opportunity for the two group to meet and exchange views and experiences.

The European Heritage Summit will be co-hosted by Europa Nostra, the Prussian Cultural Heritage Foundation (SPK) and the German Cultural Heritage Committee (DNK), acting as national coordinator of the EYCH in Germany. The Summit will engage and mobilise a wide range of stakeholders, public and private, for an ambitious European Agenda and Action Plan for Cultural Heritage. As part of the Summit, ENCATC will hold its 5th Working Group on "Evaluation of International and European Transnational Cultural Projects" on 19 June in Potsdam, Germany. At this occasion, hosted by ENCATC member, Fachhochschule Potsdam, the selected topic for discussion is "Evaluation issues and practices of Network projects and practices: from satisfaction survey to exploration of networking process".

The European Heritage Days were presented by Jelena Mocevic from the Council of Europe. During the European Heritage Days, doors are opened to thousands of monuments and sites (some of them normally closed to the public), allowing people to enjoy free visits, learn about their shared cultural heritage and become actively involved in the safeguarding of Europe's heritage for present and future generations. All the stakeholders at the meeting were encourage to reflect on how they could contribute and help boost, in terms of communication, the initiative's European dimension?

The day closed with an exchange on how to maximise the Year's impact through efficient communication.

The next meetings for the European Year of Cultural Heritage Stakeholders' Committee meetings are planned for June and November 2018.