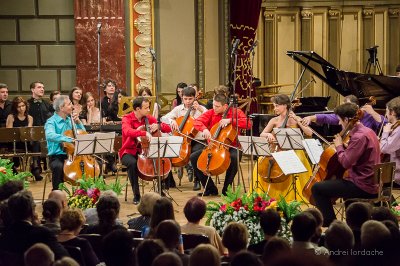 Announcing first line up in the ENCATC Congress' artistic programme

ENCATC is delighted to announce that the VIOLONCELLISSIMO Ensemble is the first in a line up of artistic programming at its 2018 ENCATC Congress in Bucharest, Romania from 26-29 September 2018.

Violoncellissimo is one of the most famous Romanian ensembles which developed in the last 15 years. It was founded by the renowned cellist Marin Cazacu who, together with his students, created a new way of promoting chamber music and young talented Romanian musicians.

The performance which took place in George Enescu International Festival in 2001 was a great success. Seven years later Violoncellissimo amazed the public with an unique concert in Romania performed by 60 cellists in the Romanian Athenaeum. They repeated the event on 26th of May 2013 but this time with 100 cellists.

In the last years of activity Violoncellissimo performed in Romania and abroad within important cultural events. The most significant are: the Celebrating Concert of 140 years since the birth of Constantin Brâncuși – in Bruxelles, National Day of Culture, Hope and Homes for Children and UNITER Gala Awards.

The proposed programme, consisting of original pieces and transcriptions, reflects technical and expressive possibilities of one of the most popular musical instruments  - the cello, and the stylistic diversity that this can express.