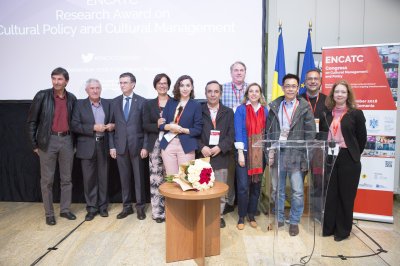 ENCATC announces the 2018 winner of its Research Award!

On the evening of 27 September in Bucharest, Romania, Dr. Alba Victoria Zamarbide Urdaniz from Waseda University in Japan was announced as the winner of the 5th ENCATC Research Award on Cultural Policy and Cultural Management.

She impressed the international jury with her PhD on "Re-defining the role of 'buffers' in the management of the historical territory. The discrepancies between theoretical concepts and practical interpretations of 'buffer' zones in Eastern and Western Cultural World Heritage sites.”

The 2018 Award winner was revealed at the ENCATC Research Award Ceremony held in Bucharest, Romania during the 26th ENCATC Congress "Beyond EYCH2018. What is the cultural horizon? Opening up perspectives to face ongoing transformations."

A global audience of leading academics and renowned researchers, policy makers, cultural operators, and artists were joined by representatives from the European Parliament and the Romanian Ministry of Culture and National Identity for the Ceremony of the only international Award recognizing excellence in cultural policy and cultural management research. Speaking on behalf of the Award’s International Jury, Francesca Imperiale, President of ENCATC said: “This extremely well designed and written study, with its rich theoretical perspective, comparative approach, and “real world” application, reflects the true spirit of the ENCATC Research Award.”

The winner, Dr. Alba Victoria Zamarbide Urdaniz expressed her deep gratitude for the ENCATC Award’s prestigious international recognition: “I would like to thank ENCATC and the Award’s international jury for this opportunity to share my research in Europe and beyond that has benefited from a social approach which I learn from a Japanese methodology. This proves that the consideration of many human layers of cultural management needs worldwide attention.” The winner will have her PhD thesis published in the ENCATC Book Series on Cultural Management and Cultural Policy Education by the international publishing house, PIE Peter Lang.

“ENCATC is very honoured to have Mr. Mircea Diaconu, Member of the European Parliament and Vice-chair Committee on Culture and Education to be with us today to announce the jury’s choice for the 2018 ENCATC Research Award winner,“ said ENCATC Secretary General, GiannaLia Cogliandro Beyens. “This is the first time a member of the European Parliament has announced the ENCATC Research Award winner. It is also the first time ever that we have commissioned to a local artist, Nicolae Stoica, the design of the Prize. With the idea to help the mobility of the artistic work and the promotion of local artistic talent this will be continued in the years to come.”

On this occasion, Prof. Mircea Dumitru, PhD, Rector of the University of Bucharest the largest university in Romania and one of the first two in the country, addressed the audience to emphasize the crucial relationship between research and teaching. He also praised the important work being done by PhD students as the next generation of talent bringing new perspectives to benefit cultural management and policy.

Alongside the 2018 winner, the finalists were applauded for their relevant contributions to the field of cultural management and policy research: Dr.Francesca Giliberto for her PhD on "Linking Theory with Practice: Assessing the Integration of a 21st Century International Approach to Urban Heritage Conservation, Management and Development in the World Heritage Cities of Florence and Edinburgh" obtained from Politecnico di Torino in Italy and the University of Kent in the United Kingdom, and Dr. Matina Magkou, for her PhD on "Value and evaluation in international cultural cooperation programmes focus on the EuroArab region" obtained from the University of Deusto in Spain.

Launched in 2014, the ENCATC Research Award exists to stimulate academic research in the field of cultural policy and management, to explore contemporary issues at stake and possibly anticipate new cultural policy orientations through comparative and cross-cultural research. Moreover, it contributes to the process of creating an infrastructure, a network of researchers who are doing comparative research projects in cultural policy and management issues. The Award also has the generous support from the Creative Europe programme of the European Union.