Xia Jing Shan is considered the first Buddhist Art Maestro Across Centuries. His intent conforms to traditions which trace back to Tang and Song dynasty. He is a legendary master building up contemporary Buddhist art and passing down the culture to the future.

Xia Jing Shan is a Chinese Buddhist art virtuoso that spans across centuries. He has inherited the tradition and also innovated the art of Chinese calligraphy and painting. Xia's artworks apply the neat and exquisite style of Daoist depictions of characters passed down from the Song and Yuan dynasties, and exude the literati art ethos found uniquely in traditional Chinese art. Furthermore, he also integrates Western perspective techniques in his art, while also incorporating his personal realizations and inventiveness on top of this diverse foundation he has formed. His ink expressions are composed with robust lines and profound image-shaping abilities, with his Buddhist art transcended beyond the conventional standards set for religious images, opening up a new epoch-crossing aesthetic realm that is elegant and otherworldly. His representative works have been reserved in several important museums worldwide, including the Asian Art Museum in San Francisco, the National Palace Museum in Beijing and the National Museum of China.

Xia Jing Shan was under the tutelage of renowned artist Guo, Wei-Qu who specialized in the genre of Chinese landscape and flower-bird paintings. After coming to Taiwan in 1949, he met Master Nan Ting and Nan Huai-Chin who helped to set the basis for Buddhist principles that Xia would follow and integrate in his creation. In 1988, Xia decided to only paint Buddhist art for then on. He dedicated to promoting philanthropy through art and education with unconditional devotion, restored cultural heritage artifacts, and founded Jing Shan College of Art. In 2014, The Jing Shan Arts & Culture Foundation founded in Taiwan aims to pass down the profound culture of Chinese calligraphy and painting to a new generation of art talents.

On "Jing Shan Classic・Maestro of the Buddhist Art: Xia Jing Shan's Exhibition", there are selected masterpieces of Xia Jing Shan's series. It starts with scholars' portraits representing the bustling world; followup, Taoist and Buddhist figures, such as Zhong Kui, Dharma, and Arhat, interpret transcending the ordinary; benevolent Avalokiteśvara paintings then show her kaleidoscopic characters; finally, Bhaiṣajyaguru represents the wish peace to the world. At the same time, with multimedia technology, Xia Jing Shan's cross-century aesthetics can be displayed in both dynamic and static style. This exhibition is the first solo exhibition in Taiwan after Master Xia Jing Shan rested in peace. It is significant and meaningful to present Master Xia's works at the Fo Guang Shan Buddha Museum in the sense that Master Xia pays the highest tribute to the Buddha with his lifelong career. 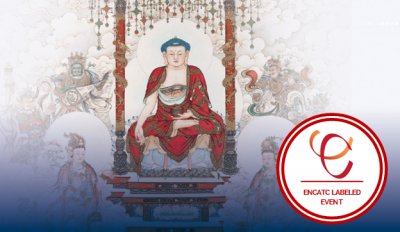