This International Study Tour was a once in a lifetime chance to learn about arts and cultural management in one of the most iconic cities in the world. The three-day intensive programme in New York City fostered an international exchange of ideas, projects and best practice through study visits, lectures, cultural tours, and debates. Many of the visits included behind-the-scenes access revealing new perspectives and insight into the day-to-day management of world-renowned arts and cultural institutions. The programme also set the context for the  7th ENCATC Academy on Cultural Relations and Diplomacy: "The Rising Role of Cities" (15-16 February) by having visited key arts and cultural institutions that are playing important roles in the city's cultural external relations.

A question seemed to resonate throughout the different cultural visits: how does NYC do to stay competitive and rank among the top leading cities in the field of culture and creativity year after year? Talks with some of the most relevant actors in the city’s cultural policy and management shed some light on this issue, with participants gaining insights on NYC’s cultural planning, the latest infrastructural developments, curatorial programmes design policies, business models and innovative projects being developed.

The Study Tour started on Monday with a cultural visit to The High Line, an out-of-use railroad converted into a public park, highly used by both locals and visitors, displaying artworks, and symbolising a long-lasting community advocacy effort to preserve the structure.

The next visit as to  The Whitney Museum of American Art and to see its remarkable exhibition “An Incomplete History of Protest”. Here, participants were welcomed by Jane Carey, Community Affairs Manager, Visitor Experience. The museum has community programmes that build sustained connections that go beyond the single museum visit, bringing art, ideas, and dialogue to classrooms, senior centers, and community-based organizations around the city.

At the David Zwirner Gallery, its Director Veronique Ansorge, welcome the group and focused her presentation on some of the main challenges galleries face nowadays, from finding the balance between quality and quantity, and the need to adapt to the art world becoming more and more digital.

A highlight of the day was surely the talk with Laurie Beckelman, Associate Director at The Shed. This new multi-arts center is being built at the Hudson Yards and will open its doors in 2019. Besides its amazing architectural design – with a movable structure that allows it to have a “deployed” and a “nested” position, and multiple variations of the internal elements distribution, what makes of The Shed a truly unique project is the fact that its artistic programme, directed by Alex Poots, will be 100% artist-driven, with works specifically commissioned and designed for The Shed.

On the second day of the Study Tour, Sarah Henry, Chief Curator and Deputy Director of the Museum of the City of New York, guided the participants through the exhibition “New York at its Core”, which organised the past, present and future of the city around four main concepts linked to it in the people’s imagery: money, diversity, density and creativity. The Museum of the City showed an impressive use of digital and interactive installations which, in the words of Henry, “allow to diversify the collection, capturing the stories of people which are not captured by traditional objects”.

In the afternoon, Quincy Houghton, Director of Exhibitions at The Metropolitan Museum of Art, and András Szántó, Moderator of the Global Museum Leaders Colloquim and also advisor at The MET, discussed with participants about the museum’s global outreach, and the specifics of this international dimension in the case of US institutions, where museums provide on certain occasions the role of a non-existing cultural ministry. Houghton and Szántó also reflected on the fact that “large visitors numbers do not necessarily mean a better museum in terms of visitors’ experience,” and the need to stay true to one’s missions and to not programme for attendance only.

An intensive programme was prepared for the third and last day of the Study Tour. After an optional visit to Freedom Tower, participants visited The Oculus and talked to Isolde Brielmaier, Executive Director of Arts, Culture and Community at the Westfield World Trade Center. Brielmair explained the opportunities and limitations for artists to work in a private-owned, commercial space, very unique in its design, and located in a highly symbolic space for the city as a whole, next to the 9/11 memorial. She also explained the artistic and cultural programme developed at the Westfield World Trade Center, which includes a forward-facing dimension (with a big screen showing audio-visual artworks and two big installations happening inside The Oculus every year), and a “behind the scenes” dimension corresponding to an educational programme addressed to children and other community groups.

After lunch, Tom Finkelpearl, Commissioner at the New York City Department of Cultural Affairs, presented the new plan “CREATE NYC: a Cultural Plan for All New Yorkers”, built from extensive public engagement, with the principles of diversity and social impact playing a major role. In fact, this is New York City’s first-ever cultural plan. Nearly 200,000 residents, from every corner of the city, stepped up to share their priorities, concerns, and ideas about how we can make sure that–here in New York–culture is for everyone.

The day, and the Study Tour, ended with a visit to the 9/11 Memorial Museum, where Jan Ramirez, Executive Vice President of Collections and Chief Curator, and Danielle Hodes, Assistant Public Programs Manager, talked about the specifics of a memorial museum and explained the curatorial work done in this particular case. The group also talked about how to engage visitors around sensitive topic and curatorial challenges.

READ OUR INTERVIEW WITH SANDRA LANG

In the framework of the 7th ENCATC International Study Tour in New York City, ENCATC sat down with Sandra Lang, Director of the Visual Arts Administration M.A. Programme at NYU Steinhardt, a member of the network since 2016. As a co-organiser of the event and with her close ties to New York’s vibrant visual arts scene, we wanted to talk about how she adapts her teaching and curriculum in face of constant change and learn about her experience co-designing a study tour programme for ENCATC members and our followers.

WANT TO LEARN MORE ABOUT THE ACADEMY?

As the 7th International Study Tour was closely linked to the 7th ENCATC Academy on Cultural Diplomacy: “The Rising Role of Cities”, we sat down with Gerald Lidstone, Director of the Institute for Creative and Cultural Entrepreneurship at Goldsmiths, University of London. As a leading expert in culture in external relations, we talked about the focus of the 2018 Academy and why this would be a unique and important learning opportunity for ENCATC members and participants. 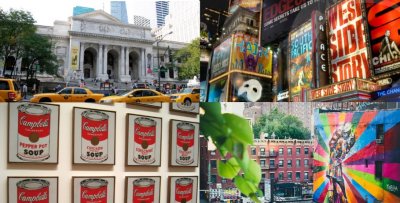